Another WordPress Challenge…2012’s Blogging from: A to Z April ChallengeThe American Alligator is the largest reptile in North America. Louisiana has the largest alligator population, approaching 2 million.  Alligators can be found living in lakes, ponds, canals, rivers, swamps and bayous.  Most of Louisiana’s alligator population is found in coastal marshes.  These cold-blooded creatures are often seen basking in the sun warming their bodies before returning to the water to hunt their prey.  They will hunt anytime but particularly at night where they are better adapted.

On a personal note…Alligators scare the hell out of me.  This guy was no exception!  This picture was taken in October 2011 while on a swamp tour during a family reunion. 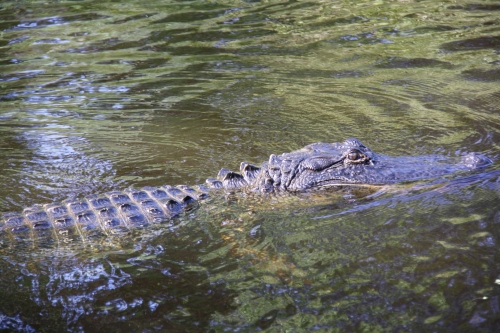