Day 12. Surprise: I love when I stumble across coins when I’m walking. It’s a lovely surprise. That would be a lucky photo for me. Can you think of a way to capture surprise? 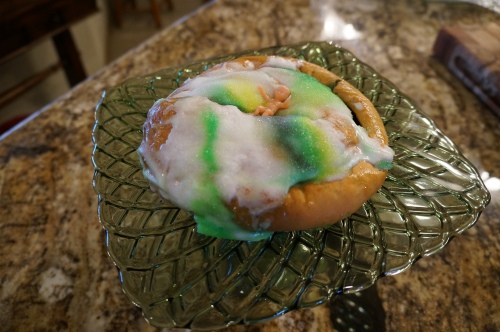 In the southern United States, the tradition was brought to the area by colonists from France and Spain and is associated with Carnival (also known as Mardi Gras). Celebrated across the Gulf Coast region from the Florida Panhandle to East Texas, it originated in French Louisiana and King cake parties in New Orleans are documented back to the eighteenth century.

The king cake of the New Orleans tradition comes in a number of styles. The most simple and the most traditional, is a ring of twisted bread similar to that used in brioche topped with icing or sugar, usually colored purple, green, and gold (the traditional Mardi Gras colors) with food coloring. In 1972, a small bakery in Picayune, Mississippi, Paul’s Pastry, started adding fillings

Also, some bakers have now taken the liberty to offer king cakes for other holidays that immediately surround Mardi Gras season, such as green and red-icing king cakes for Christmas, red and pink-icing cakes for Valentine’s Day, and green and white-icing cakes for St. Patrick’s Day. Others have gone a step further and produce specialty king cakes from the beginning of football season for Louisiana State University and New Orleans Saints tailgate parties, then for Halloween, then Thanksgiving – and do not cease until after Mardi Gras season with an Easter holiday king cake.  It has become customary in the Southern culture that whoever finds the trinket must provide the next king cake or host the next Mardi Gras party.

Surprise...a history lesson wrapped in a pastry!  Some information gathered from Wikepedia and of course personal first hand knowledge.

What do the prompts mean?

There are no rules when playing along with photo a day, you can be creative as you like! Interpret the prompt as you please. For those that need a little help, some more suggested details about each prompt are below.

13. Circle: Look as you go about today for things shaped in circles. Is it the tyres on a bus? A big sign? Or something else?
14. Something yellow: Find something yellow in your travels today and take a photo.